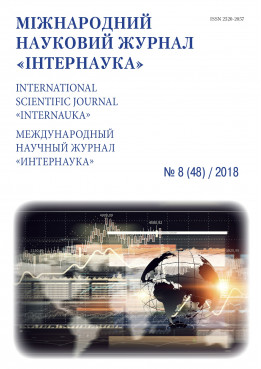 PhD, Docent of the Department of

Science is a complex, multifaceted phenomenon that can be considered from different points of view: cultural, logic-gnosiological, activity orientated, practical, informational, institutional, etc. From the institutional point of view − it is a special social institution that provides sustainability and certainty to social relations and, at the same time, accelerates social development. The institutional character of activity means that in the modern era scientific activity is hierarchical, has complex organizational forms, is based on a special material base, a system of special methods [1].

The essential features of social institutions include:

For example, the institute of education implements its activity in education, upbringing, vocational training through schools, universities, etc.; the institute of science envisages the presence of scientific activity in educational institutions, the existence of research centers, scientific institutes, etc., and others. Creation of new knowledge has always been in the structure of education, since many teachers and educators have always been engaged in this. Ancient Greek prototypes of future higher education institutions knowingly focused on the creation of new scientific knowledge − the Academy of Plato, Lyceum Aristotle, the Pythagorean Union. However, the research activity was incidental to the education system for a long time, in which the best humanistic and scholastic sciences developed until the XIX century. Natural and scientific knowledge evolved not only outside the education system, but often outside the official science. Institutional research function took shape in the era of the industrial revolution in the late XVIII – early XIX century. It was at this time that intense research in the natural sciences began. In general, the implementation of this function is concentrated at the higher level of the education system. At the end of the XIX century the responsibilities of the teaching staff of higher educational institutions included the simultaneous fulfilling the role of a researcher and a teacher, and they themselves began to focus on fundamental, and subsequently – applied research. The academic level of research of educational problems is usually carried out by university departments, primarily at national pedagogical universities. Among the academic institutions studying the problems of education management, the undisputed leadership belongs to the Academy of Pedagogical Sciences of Ukraine (APSU of Ukraine). This „highest state scientific institution” was established in 1992. Among the network of institutes, which unites the APS of Ukraine, the special role in the study of education management issues belongs to the institutes of pedagogy, pedagogical education and adult education, the Central Institute of Postgraduate Education and its affiliates, the Institute of Higher Education [3].

Like any other complex social process, institutionalization is long-term and gradual. The following conditions are required for its implementation: