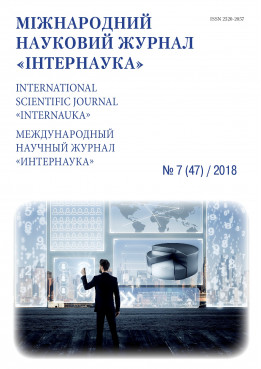 Associate Professor in the Department of Management and Administration

in the Department of Management and Administration

Summary. Ukraine has embarked on the path of building a modern stock market. At that time, in the world practice, principles and mechanisms of state and supranational regulation of financial markets were formed. This gives our country the opportunity not to repeat mistakes made by other states, but to create an optimal mechanism for the functioning of the stock market based on international experience and national characteristics.

The purpose of the paper is to analyze the principles and mechanisms of state regulation of the stock market.

The importance of creating an adequate legal framework as the most important measure of the state policy of the stock market development is emphasized by numerous authors, in particular, in the works of Dimpfl T. [2] emphasizes the feasibility of establishing a rigid regulatory market infrastructure and its legal framework; settlement of issues of a clear demarcation of types of stock market instruments, legislative consolidation of the classification of securities into unit, debt and derivatives; taking effective measures to legalize shadow capital, preventing the outflow of capital abroad; reorganization of tax legislation on investments; harmonization of Ukrainian and international standards; prevention of negative influence on the market of monetary, currency, fiscal and tax state regulation; prevention of excessive development of government securities used to cover unproductive costs.

Gebba, T.R. notes that state regulation should provide the appropriate legislative support, rules for issuance and circulation, registration, protection of investors' rights, control of the pricing system, while the main goal of the state should be to reach a compromise between fiscal function and overall cost-effective efficiency [3, p. 62].

Prominent representatives of economic scientific thought outlined a number of principles for an effective regulatory process and prudential supervision.

The first, most important principle of management is to ensure the independence of financial regulatory authorities, which should be combined with the relevant requirements of their reporting to the supreme state governing bodies. Regulatory bodies and individuals should be protected from voluntaristic decisions, dismissals and cancellations, as well as from threats related to their rigorous performance of their regulatory functions.

The second principle is that government agencies (financial or non-financial) should have clear objectives and operations that are supported by an adequate level of public accountability.

The third principle is that there should be agreements to ensure integrity and effective management within the regulatory authorities. For example, it is advisable to maintain and implement codes of conduct for regulating the state of the regulators, including the mechanism for legal review of decisions taken by the agency. It also emphasizes the importance of proactive anti-corruption actions to prevent the "infection of public oversight" by financial institutions and markets.

During financial stagnation and crisis, the goals of high-level corporate governance can be distorted, so the whole system of regulatory institutions and assets at a disadvantage should be reformed by applying new institutional structures with a higher level of transparency and accountability.

Another key indicator of high-level public administration is the level of transparency of regulatory goals and operations, including interactions with other agencies. The Financial Sector Assessment Program shows that developing countries, including economies in transition, are far behind the developed countries. On the other hand, the supervision of the banking sector and payment systems, which is usually carried out by the central bank, is estimated even in developing countries, which is rather high. Consequently, the effectiveness of regulatory procedures is closely linked to the existence of a regulatory and regulatory body with special powers.

Another aspect of the formation of a system of mechanisms of public administration is the definition of a system of measures aimed at improving the efficiency of the securities market. Based on the analysis of the research base of the research on regulation of the securities market, all measures can be divided into two groups: measures of direct and indirect intervention in its functioning and activities of its institutions.

Indirect regulation of the work of the securities market is carried out through a general and special system of financial policy mechanisms. The first one includes:

The systemic effect of these measures generates a general microclimate of the stock market, influences the composition of securities portfolios, provides indicators and estimates that are targeted by investors. In addition, each of these mechanisms has its own nature of action on the market itself and on the work of its participants.

The mechanism of guaranteeing loans, loans, deposits can affect the redistribution of investors between different markets, in particular banking and stock markets, as well as the issuers' exit to foreign markets. In addition, this mechanism, with its successful application, can increase the overall level of confidence in the financial market.

Through the introduction of certain instruments, for example, VAT bonds, central bank securities, the state influences the transformation of debts into a securitized form, increases or decreases the overall liquidity of the financial market, stimulates the processes of innovation.

Foreign exchange regulation and currency control determine the degree of attractiveness of working with stock market instruments denominated in the national currency, other principles of market formation and development.

An important task of state regulation is to ensure the entry into the stock market of conscientious participants in financial processes. In this regard, the role of licensing as a regulator of civilized relations in the securities market is increasing.

The licensing system can be interpreted not only as a form of admission to the market. It also acts as a form of regulation of trading and certain types of economic activity, therefore, it can stimulate activity not only of different business entities, given their organizational form of management and types, as well as taking into account various branches and spheres of activity [4] . In this regard, it is important to regulate the powers of state licensing regulatory authorities; to organize systematization and consistency of laws and by-laws; to strengthen state control over disclosure procedures for market participants.

For the formation of favorable tendencies in the stock market, a fair condition is price formation. In our opinion, the content of the state mechanism of pricing is, above all, that the state should control the initial price and the price of closing the market in order to avoid its "overheating". This mechanism is thoroughly studied by Western scholars. At the same time, Ukrainian scientists and practitioners paid little attention to this aspect, and if there were scientific developments, they were not sufficiently taken into account in the practice of state regulation. The stock market price is an incentive for investors to invest, an incentive for market professionals to revitalize their profits. For public authorities, it should serve as a benchmark for so-called fair prices, as well as prices for blocking the work of a particular market.

There are several rules on the stock exchange that contribute to the formation of a fair price:

Hence, licensing and pricing are closely related to each other, but there are also peculiarities of pricing processes that combine market forces and state intervention.

One of the issues that is influenced by pricing processes in the securities market is the level of management of mergers and acquisitions of companies. In the case of an underestimation of the company's assets and, consequently, the low cost of its shares, its low profitability there is a threat of absorption of it by national or foreign companies. Moreover, mergers and acquisitions of the company are carried out in a "cheap" way: the shares of the company being absorbed are bought up for nothing, regardless of whether the acquisition is desirable, voluntary or undesirable for the company. Often, the ratio of the price of shares to their returns are disturbed. In the system of state regulation it is important to determine the bases of using price parameters in managing mergers and acquisitions of companies, to establish restrictions on violations of the basic relations developed by world practice.

Of particular importance is the assessment of the consequences of absorption processes when this process is carried out by a foreign company. Often, the purposeful absorption of this promotion is cheaper, without excessive investment, a means of penetration into the country's market. As a rule, of the three known forms of payment of the transaction - the exchange of shares in a predetermined proportion of shares of the newly formed company; use of stock and cash combinations; payment of shares in cash - the first or second one is chosen. Consequently, there is no receipt of investment resources in their most desirable form for young economies - in the form of cash flows.

To a large extent, processes for improving the pricing system in stock markets are associated with improvements in corporate governance. International practice has worked out a series of measures for the formation of an effective system of corporate governance and the work of the stock market. An interesting approach is the Center for International Private Enterprise [5, p. 40]. Executive Director of the Center, Andrew Wilson, sees the creation of a system of independent stock registers as one of the primary tasks of the government. Another task he considers the definition of standards of transparency and accountability for the sale of property, along with coercive mechanisms and procedures through which investors can seek compensation for damages. In addition, the specialist emphasizes the need to use corporate governance standards; defining the function of internal audit and the mechanism for including independent auditors in the auditing commissions; definition of procedures for solving conflicts of interest and insider trading transactions with securities. The introduction of these management procedures known in the corporate market of developed countries will provide the basis for the normalization of the stock market of countries in transition.

It is important to establish certain relations between direct and indirect mechanisms of state regulation, coordination of measures and mechanisms, which belong to the general and special ones, directed directly to the participants of the securities market.

Pricing in the stock markets of countries with economies in transition is imperfect in view of the lack of transparency in its work; numerous macroeconomic and political crises; the instability of the work of individual branches; the lack of many market elements that contribute to optimal pricing, in particular, reliable risk assessment; ineffective corporate management. This entails the need for control over pricing processes by state authorities.