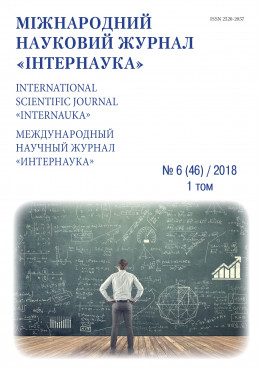 INFLUENCE OF LABOUR MIGRATION ON THE ECONOMY OF UKRAINE

Institute Of International Relations of

INFLUENCE OF LABOUR MIGRATION ON THE ECONOMY OF UKRAINE

Summary. The article describes the nature of labor migration and its impact on Ukraine's economic development. Migration processes are considered in the context of Ukraine's participation in European and world migration as one of the important factors in the formation of the national migration policy of the state.

In the recent decades, Ukraine has been the scene of active migration pro­cesses. As shown in an assessment by The World Bank, it is among the five largest suppliers of migrants in the world, preceded only by Mexico, India, China and Russia [1]. According to the United Nations Organization, migra­tion is inevitable and potentially a beneficial component of modern life in each country or region of the world. Some experts and researchers call Ukraine one of the largest donors of labour in Europe. According to the recent labour migration research, 1.2 million Ukrainian citizens are working abroad. However, an analysis of data from the European Union and Russia indicates that this esti­mate is too low. The number of Ukrainian migrant workers abroad is closer to 1.5-2 million, which is 6.8-9.1% of the economically active population of Ukraine [2].

The issues of labor migration in recent years is the focus of both domestic and foreign researchers. Patriotic school of research migration based on cooperation of Ukrainian, Russian, Byelorussian, Baltic and Polish scientists. Among the representatives of foreign countries that have had a positive impact on it, we must call Bourdieu (France), A. Vishnevsky (Russia), Zaslavskaya (Russia), D. Turner (USA), A. Jagielski (Poland). For example, T. Zaslavsky in the early 70-ies of XX century, explored the causes and consequences of labor migration from the village [3]. Today in Russia the problems of labor mobility engaged Abramov, N. Mkrtchyan, A. Reznikov. In Ukraine, the study of various aspects of labor migration presents V. Volodko, B. Gerasimenko, O. Rogozhin, M. Romaniuk, W. Sadova.

Labour migration is a complex socio-economic process defined by various ob­jective and subjective factors, i.a. climatic, demographic, ethnic, social and econo­mic ones; it is influenced the most by the two latter ones. With this in mind, researchers have identified two main functions of migration: a social and an eco­nomic function. The social function of migration consists in the efforts of migrants to meet income needs by changing place of residence, through professional growth as well as improved working conditions and living standards, while the economic one - in providing a certain level of labour mobility, territorial redistri­bution and a quantity/quality match between demand and supply of labour and skills of different profiles in different areas [4]. The main source of data on labour migration in Ukraine are two large-scale household surveys, the first of which was held in 2008 by the State Statistics Ser­vice of Ukraine in cooperation with the Ukrainian Center for Social Reforms, the 'Open Ukraine' Fund, The World Bank and the International Organization for Mi­gration [5], and the second - in 2012, by the European Union and the In­ternational Labor Organization, as a part of the 'Effective Governance of Labor Migration and Its Skills Dimensions' project [2].

The main directions of labour migration from Ukraine

Men prevail among the migrants, amounting to two thirds of the migrant workers and to 4.8% of the total number of men aged 15 to 70; female migrant workers amount to 2.2% of the women from the same age group. Also, rural popu­lation is more involved in labour migration than urban population (6.3% and 2.2%, respectively) [2]. Table 2 illustrates the education level of Ukrainian labour migrants.

Undoubtedly, only a small number of workers are able to find jobs that match their skill level; the vast majority of them perform low-skilled jobs regardless of their education level. Table 3 shows the main employment areas of Ukrainian migrants.

According to statistics, which led demographers to work abroad in the last 20 years, emigrated from 7 to 15% of the economically active citizens. A certain percentage of them "donkey" abroad permanently, the other part - continues to work and believes that they return to Ukraine with better economic opportunities. The largest part of the Ukrainians goes abroad for seasonal work to survive. Significantly changed the situation with the geography of labor migration: more and more Ukrainians prefer to work in the EU and also they are ready to leave the European continent. In turn, traditionally the largest market of labor migration in Russia is gradually declining, while the Ukrainians are still the most earned money transferred from this country [6].

Among the Ukrainians increased percentage of those who has no illusions and hopes for improvement in the economic climate in the country over the past 2 years. According to sociologists, the dynamics are added not only news from the front in the Donbass, the political crisis and corruption scandals, but it is clear to everyone the reality of life. The devaluation of the hryvnia, lower confidence in the banking system, unemployment, rising prices and tariffs, the problems in the health sector, the lack of sane social policy and pension reform - all of these factors together affect all citizens, but make really think about their existence. However, talking about the search for a better life, only a small part is able to realize their plans. Thus, according to data from the Gorshenin Institute, more than 40% of the economically active Ukrainians aged 18 to 29 years old are ready to leave Ukraine for more gainful employment and career prospects. According to a survey of GFK Ukraine, 8% of Ukrainian citizens (which is about 3 million people) in the near future plan to build labor migration abroad. For example, five years ago the number was less than half - 1.2 million Ukrainians. By the way, leaving only one of eight of those who intend to work abroad.

So, the impact of labour migration on Ukraine's economic development is am­biguous. On the one hand, the additional money flowing into the country contri­butes to poverty reduction, stimulates the domestic production and supports the balance of payments; on the other hand, the outflow of workers abroad reduces the supply of the domestic labour market and creates risks for the stability of the social security system. In addition, migration leads to the loss of skills, as highly- trained people perform mainly unskilled work abroad. The main ways of solving these problems include the creation of new jobs, en­hanced labour remuneration, limitation of the shadow economy and shadow em­ployment, civilized forms of leaving abroad for work, prevention of human trafficking, continuous analysis of the scale of illegal labour migration from Ukraine and carrying out measures to prevent this phenomenon. Of particular importance is the signing of the relevant international agreements and improving existing legislation regarding licensing of firms for employment abroad.