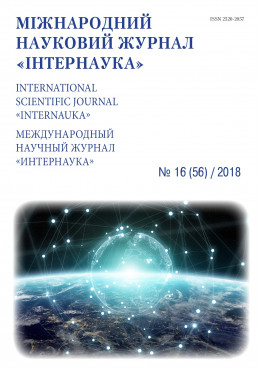 Summary. The data on the possibility of using a mixture of the biomass of some halophytes (H.strobilaceum (Pall) Bieb, H.belangeriana (Moq) Botsch, T. hispida Willd, H. aphyllum (Minkw) Iljin, K. caspia, S.microphylla Pall, C.lanata (Pall) Botsch ) and livestock waste as a source of biogas production, as well as the composition of the biogas produced.

At present, one of the most persuasive directions for solving the problem of the lack of an energy supply is the creation of renewable alternative energy sources. It should be noted that as the world population grows, the rate of use of hydrocarbon resources accelerates, which has caused a sharp decline in their reserves. Therefore, the most important task is to optimize the use of hydrocarbon resources and study new, alternative sources of bioethanol and biogas production [1, p. 4; 2, p. 77].

In addition, fuel energy is the main source of pollution of the environment and the atmosphere. In this regard, the search for cheaper and environmentally less energy sources is underway. One of which is the production of biogas from waste (manure) of livestock farms. According to preliminary calculations, the potential of animal waste to produce biogas is more than 8 billion m3, and in all regions where manure is sufficient, it is possible to obtain biogas from it [10, p. 110].

According to experts, manure of one large cattle can give 4.2 m3 of biogas. If we assume that the energy of 1 m3 of biogas is equal to the energy of 0.6-0.7 m3 of natural gas, 0.7 liters of oil, 0.65 liters of diesel fuel, 0.5 liters of gasoline or 1.7 kilograms of firewood, or from 1 m3 of biogas can be obtained up to 2 kW / h. electricity, the importance of this technology is very promising. However, in our country, where manure is used as the main organic fertilizer in agriculture (cotton or cereal fields require 40-60 tons of manure per year), the possibility of using manure as a raw material for biogas production is limited, which requires the search for other alternative sources of biogas [1, p. 4; 2, p. 77].

At the present time, extensive scientific research is being carried out to search for unconventional energy sources, one of which is plant biomass. Special attention is paid to the development of a biotechnological method for obtaining biofuels from the biomass of halophytic plants, which are widely distributed in saline soils of arid zones and purposefully unused in the national economy [5, p. 37; 6, p. 9528; 7, p. 450; 9, p. 39].

Based on the foregoing, a comparative analysis of the biogas composition from a mixture of some halophytes (H.strobilaceum (Pall) Bieb, H.belangeriana (Moq) Botsch, T. hispida Willd, Haloxylon aphyllum (Minkw) Iljin, K. caspia, S.microphylla Pall, C.lanata (Pall) Botsch) and livestock wastes. To isolate biogas from a mixture of halovites and livestock wastes, the methods used were Kovalev (1998), Kukanova et al. (2011), Verma et al. (2007). As a metagenic source, the association of metagenic microorganisms isolated from active marsh rot in the Samarkand region was used. The studies were carried out in the mesophilic mode, with a periodic substrate addition regime, in 5-liter laboratory reactors. To determine the composition of biogas extracted from the halophyte biomass, gas chromatography "Chrom-5" (Czechia) was used. As a sorbent, Polysorb-1 (0.1-0.2 mm) was used. Chromatographic analysis was carried out in glass columns with a diameter of 1200 mm and a diameter of 3.0 mm. In the columns, the initial temperature was 20°C, the time of temperature increase was 15 minutes, the maximum temperature was 80°C, the gas velocity was 70 ml / min, the time of gas leaving the column was 4-5 minutes for CH4, 6-7 minutes for CO2. The detector was a cathromer. The mass fraction of CH4 and CO2 was determined in the studies, and the remainder was estimated as a mixture of other gases [3, p. 46; 4, p. 181; 8, p. 1665].

As the results of the research show, when using biogas, biomass halophytes and livestock wastes separately, as well as mixtures in different ratios, the amount of methane, carbon dioxide and other gases in the separated biogas is significantly different (Table 1).

Chemical composition of biogas obtained from biomass of halophytes and livestock wastes, in % *

It should be noted that in all variants of the experiments, the maximum amount of methane in the composition of the released gas is observed on the 17th day of methanogenesis. In the variant where only mixed biomass of different halophyte plants were used, on the 17th day of methanogenesis, the amount of CH4 in the separated gas was 55.8 ± 1.3%, and the amount of CO2 and other gases was 28.7 ± 0.9% and 15 , 5 ± 0.8%, respectively.

In the version where only manure was used as raw material, on the 17th day of methanogenesis in the separated gas the amount of CH4 was 58.7 ± 1.1%, and the amount of CO2 and other gases was 21.5 ± 0.7 % and 19.8 ± 0.9%, respectively. It is known that the amount of methane in the composition of biogas is the main quality attribute. If the amount of methane in the biogas is more than 55%, biogas can be used as a combustible fuel [6, p. 38]. As the results of our research have shown, the use of a mixture of biomass halophytes and livestock wastes as raw materials for biogas production is more effective than using them alone.

Thus, using as a raw material for biogas production a mixture of biomass halophytes and livestock wastes in the proportion of 2/5 of the biomass of halophytes: 3/5 of the livestock waste, provides an increase in the amount of methane in the biogas composition and depends on the efficiency of the technology used.