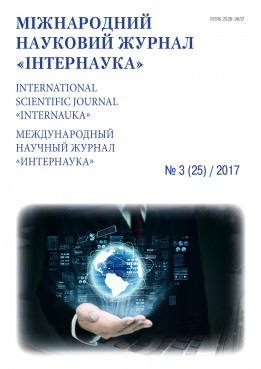 Donbass institute of technique and management

The article studies result-based management as the key concept for development and implementation of a modern sociocentric model of monitoring and control in public administration. Its main principles and approaches have been determined. The necessity of use of the given concept has been substantiated.

Nowadays, Ukraine has been facing some challenging times, and state officials, who hold key positions, have to follow the mind of the citizenry and take their opinions into consideration. Well-known scientists, experts and managers are positive that public administration needs a new approach to be developed. This approach should be community-oriented so that people could participate in the process of plan development and decision-making, carry out monitoring and control over their implementation.

Currently, public administration can be successful only when the present-day legislation starts to face real changes and apply real reforms focused on modern concepts recognized all over the world.

Analysis of scientific studies and publications

The aim of the article is consideration of result-based management as the key concept for development and application of a modern sociocentric model of monitoring and control; to define its main provisions and approaches; to give a well-founded conclusion why it is necessary to apply the given concept in Ukraine.

Paying due consideration to the latest transformations which have been happening in our country recently, the concept of “result-based management” is an effective concept for the development of Ukraine as a democratic country focused on the citizenry. The given concept (MBO – Management by Objectives) was developed in 1954 by a noted scientist Peter Drucker. It was first mentioned in his book “The Practice of Management”.  It stipulated the special method of enhancing efficiency of the organization where employees, performing their duties, are assessed not according to the performance but according to the result.

In content of result-based management, emphasis on the result, which has both principal and functional value, is basic. In case of result-based management, possibilities of an organization are used in such a way that the organization course of actions should stretch from their strategic level to the plans of individual use of working hours by particular employees. Use of willpower and thinking of the all-hands activates as early as the planning stage. [1, p.70]

Among principal provisions of the given concept are the follows:

One of the premier researchers who were a proponent of this method is D. McGregor. According to his belief, use of this method is quite practical as it gives opportunity to evaluate the management according to the results but not the individual skills. D.McGregor suggests that every low-level manager should define concrete production purposes and means towards their ends together with high-level manager.

Concept of result-based management has recommended itself as highly efficient primarily in business area. In public administration, it started to become popular in 90s. In the system of public administration, they started to understand this concept as orientation of state administrations to carrying out activities so that to enhance efficiency of public services provision. In this context, emphasis on results of their previous work is one of the main features. In this concept, control and accomplishment of plans are highly valued as equal stages of management process. Creative approach in task fulfilment and necessity of current plans completion are also permanent features.

A peculiar stage of this concept in public administration must be reliance onto obtained result. That is meant to help make certain conclusions in order to improve performance of state government bodies, local administrations and, above all, enhancement of employees’ working efficiency. Individual attention is paid to the system of motivation of public sector workers. Based on this concept, one can achieve stable development of state government bodies and public sector workers’ performance content.

It should be noted that, for the majority of foreign countries such as Great Britain, Canada, the USA, Australia, Sweden and many other western countries, orientation of performance of state government bodies to the concept of result-based management is the overriding priority of public administration development.

In this matter, special focus should be on the USA’s background. In 1993, the “Government Performance Results Act” was adopted. [5] On the basis of this act, dynamic implementing of new budgeting system began. One of the advantages of this act was setting of the task regarding the public satisfaction level and increase of the quality of provided public services. This act also defined primary ways regarding achievement of goals of government budget spending policy:

As it is known, the concept called “balanced score card” (BSC) developed by David Norton and Robert Kaplan in 1980s was taken as a basis of result-based management methodology. It should be noted that this approach is the most successfully applied in the USA and EU countries. (2, p.5)

Control of goals achievement and monitoring of implementation of goal-oriented efforts have to be done with the help of measurable variables. The discovered showings, to the greatest extent, have to fulfill the following requirements:

System of values obtained in the result is the balanced score card (BSC). When used in the process of management, it gives grounds for building-up managerial result-oriented procedures. Consequently, once used in a skillful way, BSC is a tool that gives new opportunities of effective public management. [2, p. 11]

Necessity of results monitoring is subjected to the fact that it will afford ground for minimizing the possibility of duplicating the same functions in the same subject of planning. It is also necessary for watching any particular potential defects and level of progress regarding the plan implementation, orienting onto the results of the previous work. Through this process, the possibility of similar errors is prevented. Monitoring is an effective way to improve efficiency owing to creation of necessary conditions for building up the fundament for achievement of the set goals.

Therefore, the concept of “result-based management” in such a way becomes a sovereign remedy for the struggle with the resource leak, corruption, inefficiency and bureaucracy of the public management system. Russian researcher R.Vulphovich points out that in this concept, orientation on the final result and the community is strongly marked, when the product, defined on the ground of political goals and tasks, is the initial source of processing of all the information and decision-making. Which means, it is an imminent element of formation of a new budget concept? The author stresses the great significance of citizenry as partners of state institutions in the results achievement. Thus, orientation onto the community is a necessary value of this concept. [3]

As pointed out by many authors, a substantial element of the “result-based management” concept is orientation onto the citizenry as partners of state institutions in achieving results. That is why the key task for implementation of the given concept must be total elimination of old administrative-and-command concepts of management. This requires essential changes in legislation and carrying out reforms. It is worth noting that for the effective function of this concept development of balanced score card (BSC) is needed. For this, we need to look up to the experience of the USA where implementing of this approach gives the greatest result. Implementation of the given concept in Ukraine will make it possible to promote the level of public’s trust in the government, improve the reporting level in state institutions, perfect the work of public administration, upgrade public sector workers’ skills and create supportive environment for transparency and openness in administration.